The might of Sonos has just been demonstrated in a new patent case against Google. The company won the fight and will be able to protect itself from any future lawsuits filed by Google, securing its place as one of the top smart speaker companies out there.

The “google speaker mini” is a Google Home Speaker that is going to be dumb soon. This is because Sonos has won the patent case for their product, which means that google will have to stop selling them. 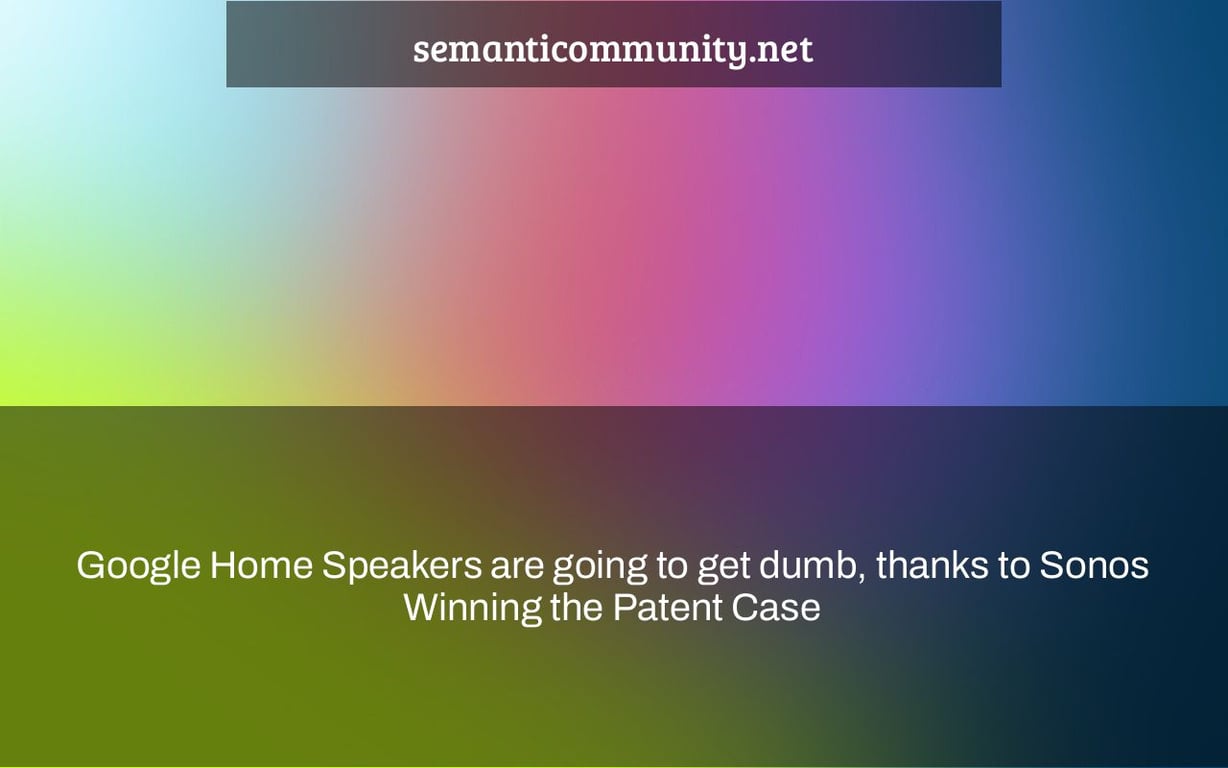 If you recall, Sonos sued Google in January 2020 for infringing on five Sonos smart speaker patents, and the lawsuit lasted as long as we can remember. The US International Trade Commission has now concluded that Google does infringe on the Sonos patent. Now, losing to Sonos would have meant that Google would have to stop producing or have their product lineup banned – such as Nest Audio, Chromecast, and even the Pixel line in the US – but Google chose to dumb down their products by downgrading via updates that remove the infringing features from end users’ products.

Why did Google lose the patent case against Sonos?

So, if you’re wondering why your Google Home isn’t behaving when it comes to music control, here is why. “We appreciate that the ITC has conclusively confirmed the five Sonos patents at issue in this dispute and declared categorically that Google violates all five,” Eddie Lazarus, Sonos’ Chief Legal Officer, stated in an interview with The New York Times. That’s an all-around success in a patent dispute, which is quite uncommon.”

However, the Google Nest Team has announced that the capability of the Google Home Speaker would be reduced in the near future. You may read the following statement in its entirety:

Hello, everyone! We’re making some adjustments to how you set up your devices as a result of a recent court judgement, and the Speaker Group feature will continue to operate. You’ll notice a few changes whether you use the Speaker Group function to manage the volume in the Google Home app, via voice with the Google Assistant, or directly on your Nest Hub display: You must change the level of each speaker individually rather than utilizing the group volume controller to regulate the volume of your speaker groups. You won’t be able to control the volume of your Speaker Group using your phone’s physical volume button anymore. Most Speaker Groups should continue to operate normally unless you have a speaker group with other brands of Cast-based devices, such as JBL or Lenovo, which need Cast firmware version 1.52.272222 or above. Check read this page for instructions on how to determine the firmware version of your device, or contact the manufacturer directly. To complete product installation and upgrades, a limited number of customers will need to utilize the ‘Device Utility app’ (DUA). You may be prompted to download and execute DUA, which will confirm that your device is connected to Wi-Fi and has the most up-to-date software. We will continue to assist our users and aim to keep any future changes to a minimum. Thanks, The Nest team at Google

To be honest, this is a major blow to those who depend heavily on their home helpers, including myself. Users are really venting their displeasure in the comments area. The removal of the functionality by Google is a significant letdown. If you’re asking why Google doesn’t pay Sonos royalties, you’re correct – in fact, Sonos has said that rather than ruining users’ experiences, it would prefer Google to pay royalties for its patent.

But, for the time being, we’re not sure whether this will even happen, given Google’s history of destroying perfectly good items or services for no apparent reason. But let’s hope Google does the right thing and makes life easy for everyone.

Ars Technica is the source of this information.